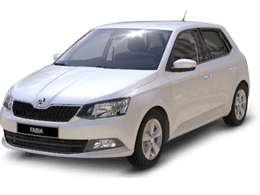 Cool, city car with incineration on the border 4.5 - 5.5 l / 100km. With dynamic driving around 6.5 l / 100km. The manufacturer declares minimal combustion at the level of 4 l / 100km and it is possible to get such a result during a liquid, without cork journey. The 5-door Class B model will easily accommodate four traveling people. The successor of the Felicia model. What characterizes this model, which made the car rental company eagerly equips the fleet with just this vehicle is freshness and elegance. Modernity combined with sharp edges and a clean surface. The play of lights that introduces the bodywork makes Fabia a car with its own unique character. The Fabia model contributed to the commercial success of Skoda - over 3.5 million vehicles have been sold so far. The model from the beginning is related to other Volkswagen cars. Awarded many times, including the title of the Car of the Year 2007 in Serbia, as well as the Car of the Year 2015 in the plebiscite of the "What Car?" magazine.