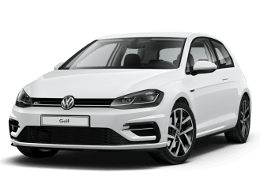 Golf has never belonged to the cheapest Volkswagen compacts. The German company rewards it with rich equipment and new engines. Dynamic city car with economical fuel consumption at the level of 5.8l / 100km with the engine 1.0 TSI 110KM 81kW. Golf is still a icon of compacts on the European market and the best-selling model on the Old Continent. The name of this model is inspired by the name of the sea current - the Gulf Stream. Golf appeared on the market in 1974, replacing the now legendary Beetle. It has been a long time since it was put on the market, and seven generations of compact Volkswagen have already been sold: 1983, 1992, 1997, 2003, 2008 and 2012. Golf follows a slow, well-thought-out evolution that is based on momentary fashions. Not one rental company has him in his fleet, because come many generations Germans have already released this word Golf says it all.