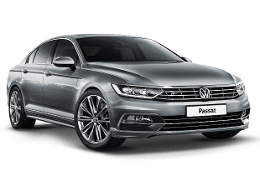 A very popular model of the German brand in Poland, produced since 1973. One of the best-selling Volkswagen cars in history - so far over 20 million drivers have bought it. During his debut he was one of the most modern family cars in Europe. His reputation confirms successes in the plebiscite for the European Car of the Year: he won it in 2015 and three times in the best three (1989, 1997 and 2006). In our offer for car rental was found with a manual gearbox and engine 1.4 TSI, which provides about 6.5 liter of petrol for 100km. Passat is currently the winner of the 2014 Steering Wheel. It is considered a model in the fields of design and technology. It is a unique combination of comfort, elegance and dynamics for people who have clearly defined priorities. Each Volkswagen has a high-quality interior and a recognizable, eye-catching look. Certainly, when deciding to rent a Passat, we will be surprised by how many possibilities it has to offer.